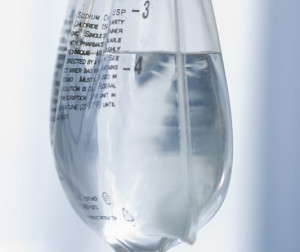 I recently returned from a 9-day intensive meditation retreat focused on the practices of concentration and mindfulness. The first four days of the retreat presented me with the usual struggle – re-learning how to slow down, quitting caffeine, abandoning cell phones, blogs and the internet, and mostly, just watching the habit patterns of my mind replay themselves ad nauseum. By day five I was really settling in nicely, my mind was calmer, clearer, and more focused, and I was able to steady my attention on the breath – and even more interestingly to me – the stillness of knowing the breath. I was really beginning to hit my stride and was looking forward to deepening my concentration in the following final days of the retreat. But on Sunday night, instead of listening to that night’s talk on practice with my fellow practitioners, I found myself in the emergency room of the nearest hospital with an IV drip of saline in my arm.

I would later find out that I had heat exhaustion. That Sunday the temperature had reached 105. The day before when it was 95 I noticed that my steps were a little unsteady, and that I was slightly light-headed. I did not understand what these symptoms might mean. I felt great otherwise and thought I was drinking plenty of water. (Later I learned that I was drinking far too little water, and even if you do walking meditation in the shade, the intensity of that heat leeches the water and electrolytes right out of you.) So that Sunday night, my body began speaking to me more loudly, and I finally had no choice but to heed its message. A kindly person from the retreat center drove me to the hospital and waited with me as I lay on a gurney in the emergency room and they triaged me, monitored my vital signs, and did blood tests. I lay there for more than two hours before anyone told me what was wrong with me. I had no choice but to allow the experience to be just as it was; no point to resist what was happening. My body was the boss, and so my mind, pliable and at ease because of five days of concentration, relaxed and let things unfold. So I lay there the whole time watching the rising and falling of my chest. On the other side of the curtain on my left a man was in the process of passing away. I witnessed the doctor explain the nature of a “devastating injury” to the man’s family. Down the hall to my right, another man may have been dying as well (we never found out for sure) and doing it very loudly, with lots of screaming and pain. The screaming went on for about a half hour. And then there was a chilling silence. In the meantime emergency room nurses, doctors and technicians rushed back and forth, doing the best they could. As I lay there I understood then that I was in the midst of life. Or, as they say in Zen, in the midst of the great matter of birth and death. The gurney was now my practice cushion.

When I learned that I had heat exhaustion, was stable, and could go, I rose from the gurney as if a stranger in a strange land, filled with gratitude and sadness. Later, back on retreat, I reminded myself that you never get the retreat experience you want – maybe not even the one you need. When you go on retreat, birth and death do not stop happening, they just change their form. If anything, being on retreat is really just a way of experiencing life more directly, with more intensity. Retreat is just one form that life takes – but wherever you are, life doesn’t stop being life. It never does.

Great is the matter of birth and death,
All is impermanent, quickly passing.
Awake! Awake!
Don’t waste this life. 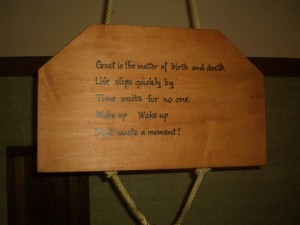 This is a great graphic from an article in Scientific American showing the different regions of the brain that light up during the different phases of the meditative process. From focused attention, to mind wandering, to awareness of wandering and redirecting of attention. 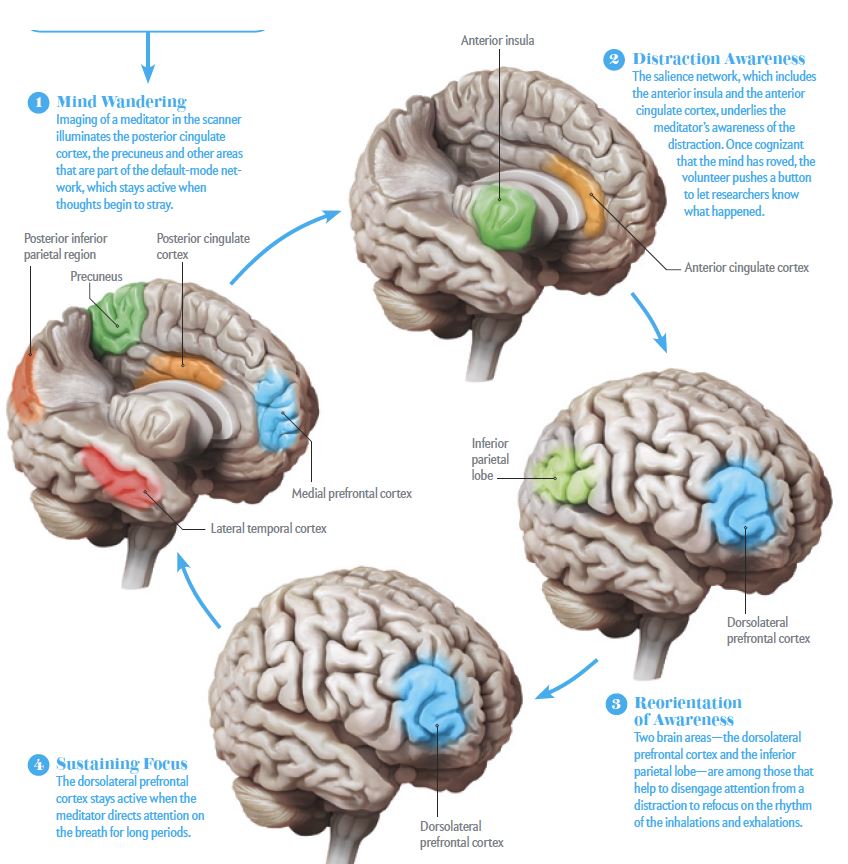